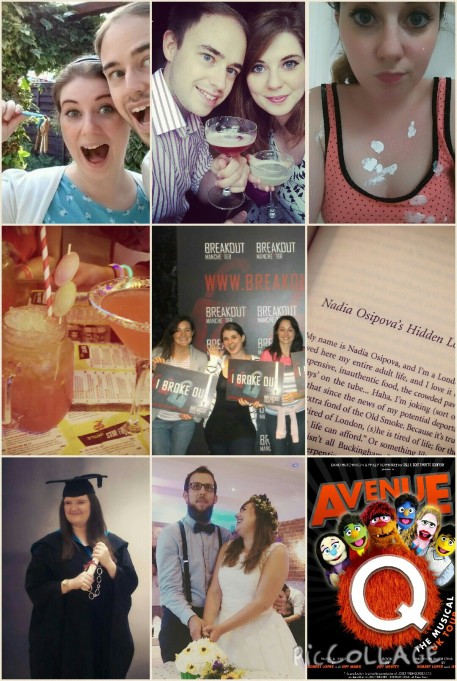 After an extremely bookish June, July was all DIY, DIY, DIY!! On the 2nd we finally collected the keys to our first house and it was such a long time coming that it still doesn’t feel real. I sit there on the couch in the evenings feeling like the guy we bought it from is going to burst in the front door and be all “LOL JK GTFO.”

We had three weeks where we still had our rented flat to retreat to so we decided, in a first flush of enthusiasm, to paint every inch, gloss every skirting board, touch up every ceiling. By the end of week one we were decidedly in “fuck it, it’s fine” mode and let’s just say that most of the walls never got their recommended second coat… Still, I have killed a lot of magnolia and feeling pretty proud of myself. Particularly as most of the earlier painting was done left-handed (see last month’s post about damaging my wrist!) and all the skirting boards in the master bedroom were glossed after imbibing an entire bottle of wine (ahem!). There’s still a mountain of unpacking ahead of us, and a lot of furniture we still need to buy, but we are finally and officially On The Property Ladder and it’s pretty cool up here.

The 6th was my birthday – and the start of the last year I can describe myself as “twenty-something author”… My husband and I normally take one another on weekend trip “adventures” for our birthdays, but we were in the midst of all the painting, so that’s been delayed until mid-August. The last time my birthday trip had to be put off due to moving house (when we moved from London to Cheltenham in 2013) I ended up getting engaged during it, so the husband has a lot to live up to with this one.

If I was feeling hard done by for not getting birthday celebrations where I got to drink too much and dance like a twat, then this was more than made up for by my beautiful friend’s hen do in Manchester. It was the first hen weekend I’ve ever been to where I haven’t known the majority of the other hens. Luckily they were all cracking girls, and we had a great time seeing Wicked (my 14th time! Man, I’m obsessed with that musical…), playing party games in the apartment and going “out out” for food and many, many drinks. At one point I ended up re-enacting the end of Titanic on the rainy Manchester pavement. On the Sunday afternoon before we parted ways we did a “break out” activity. I had been really nervous about this – what if I was utter crap and held my team back?? My nerves were not helped by the fact that I was put into the team tackling the harder of the two rooms. But it was absolutely amazing!! We broke out with 51 seconds (out of a total of 60 minutes) to spare, and I’m already desperate to try another room!

On July 16th the paperback copies of my second novel Somewhere Only We Know released and my phone was alive with notifications! So many people shared their excitement and pictures of their paperbacks arriving with me – I hope everyone enjoys Alex and Nadia’s little story!

My middle sister graduated with Honours from the University of Warwick this month. It seems like only yesterday she was a shiny new Fresher calling me up in a panic because she didn’t understand how a liquitab worked. I think she was the graduate with the biggest (and loudest) family group – my parents went into the solemn hall, but myself, my husband, my aunt, my other sister and my brother and his girlfriend all sat outside watching on a big screen, drinking Pimms cider and cheering with gusto. Sis is now off to volunteer in a mental asylum in rural India for five weeks, a fact of which I am simultaneously proud and terrified.

Just a few days after my sister graduated, my sister-in-law got married, so the celebrations continued! The weather didn’t cooperate, but it didn’t matter, because the whole of the venue – an old mill – was so beautifully done up. I drank way too much wine/shot way too many bombs, ripped my tights to buggery and fell on my arse about three times – standard for me and weddings – although I’d hoped to be a little more demure in front of the in-laws; oh well.

We had one night off from Moving Hell – about six months ago we’d treated ourselves to tickets to Avenue Q and the time finally came! We’d seen the show in London when it first came out years ago and I laughed so hard that I had a stomach ache afterwards. Pleased to report the “touring” version is just as good, if not better. If it’s coming anywhere near you, you should definitely try for tickets. Just be aware: contains foul language, dirty humour and full on puppet-sex. The older couple sat next to us had clearly not been fully warned: she had a face like a smacked arse the entire way through.

All in all, a very active July! And August looks set to be busy too, with my belated birthday trip away, house-warmings and baby showers to attend (and my exam results through, gulp!). I’m also participating in the HarperImpulse Readathon. Find out more here or by checking out the #HIReadathon hashtag on Twitter!

What I read*
I challenged myself to only read sequels or other series continuations this month! Sadly I didn’t get much reading done thanks to ALL THE PAINTING IN THE WORLD EVER.