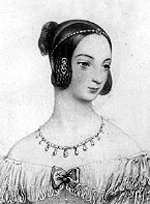 This is the beautiful Sarah Fairbrother, servant’s daughter turned ballet dancer turned prince’s wife. The delicate, talented Sarah was considered one of the beauties of her generation and already had two illegitimate children by two different men by the time she caught the eye of Prince George, the Duke of Cambridge.

A grandson of George III, Prince George was a good looking, passionate chap. There had once been hopes that he would marry his cousin, the Princess Alexandrina Victoria (later Queen Victoria) and tie up two of the Hanoverian lines of inheritance, but that wasn’t to be. Victoria was probably a little too straight-laced for George though, who famously liked his women a little more fast and loose, and was quoted as stating that all arranged marriages would end in disaster.

So it’s not that surprising that when George did marry, he went a little off piste. With two illegitimate children with Sarah already, and another on the way, he married her privately on 8 January 1847. He didn’t seek permission from his monarch, Victoria, which was required under the Royal Marriages Act, so the ‘marriage’ was rather a strange one, perhaps legitimate in the eyes of religion, but not so in the eyes of the state. Sarah was never allowed the title Duchess of Cambridge, eventually becoming known as “Mrs FitzGeorge”.

It would be one of the greatest love stories – a prince of the blood defying society and his monarch in order to wed the beautiful, whimsical mother of his bastards – if only it ended happily. Very soon after his marriage to one mistress, George took another, Louisa Beauclerk, who he described as the love of his life. Unsurprisingly, Sarah was lividly jealous and the couple ended up living largely apart for the remainder of their marriage. Prince George is buried close to Louisa, although Sarah is only a few feet away. As George had no legitimate children the title “Duke of Cambridge” died out with him, until it was revived for Prince William on the occasion of his wedding in 2011. Hopefully William’s son – the next “George, Duke of Cambridge” – will be a little luckier in his romantic prospects.

One thought on “A Hanoverian menage-a-trois”