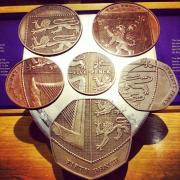 Are you in the UK? Do you have any 2008 or later issue coins in your purse? Did you know that if you put these redesigned 1p, 2p, 5p, 10p, 20p and 50p together their reverse sides build the royal shield that is shown in its entirety on the back of the pound coin?

No, neither did I until I went to the exhibition that the Tower of London was hosting on the history of the Royal Mint earlier this year. Amazed that we’d never realised it before, me and my friends emptied wallets and purses and pockets until we had one of each and could verify it for ourselves…

A cursory search of the internet proves that me and my group weren’t alone… people actually have no idea about this clever little design lurking in their wallets. It’s probably mostly to do with the fact that the pre-2008 coinage is still dominant in circulation and their designs (1p, a Beaufort portcullis; 2p, the Prince of Wales’ plume of ostrich feathers; 5p, the Scottish thistle; 10p, a crowned lion; 20p, the Tudor rose; 50p, Britannia herself) are much more familiar to the British public.

So take a closer look at what’s in your hand the next time you get some change – the coinage of the royal shield is a lovely little oddity and a great piece of trivia!

One thought on “A sterling shield”