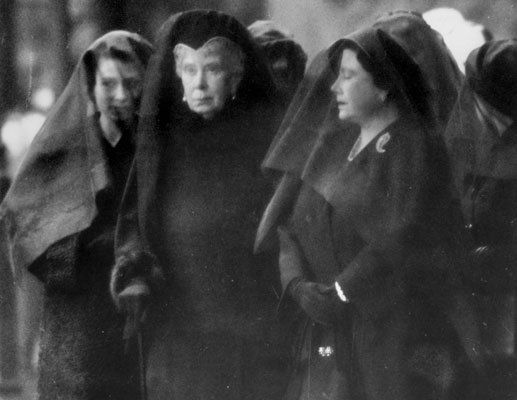 This iconic image shows three Queens of England together, united in grief at the funeral of their son, husband and father – George VI – who had died at the young age of 56 only nine days earlier, February 6th 1952. The stammering King-Emperor had reigned for fifteen years and had grown to be popular; he’d been their war-time monarch, having had stepped up to the throne vacated when his brother, Edward VIII, had abdicated. Edward – now styled Duke of Windsor – returned to London for the first time in years to escort his royal brother’s coffin on its procession.

This photograph was widely circulated by the world’s media, along with the now Queen Mother’s message message to the people of the Commonwealth:
“Your concern for me has upheld me in my sorrow and how proud you have made me by your wonderful tributes to my dear husband, a great and noble King… I commend to your our dear daughter: give her your loyalty and devotion; Though blessed in her husband and children, she will need your protection and your love in the great and lonely station to which she has been called. God bless you all; and may He in His wisdom guide us safely to our true destiny of peace and good will. Elizabeth R.”

There wouldn’t be three queens in England for much longer; Queen Mary – already 85 and frail at the time of her son’s death – would pass away just over a year later, ten weeks before her granddaughter’s coronation.

2 thoughts on “Three queens in mourning”