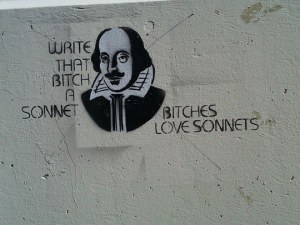 It’s an intriguing prospect. Was Will Shakespeare – whose fame to facts known ratio must be one of the most off-skew – a secret bigamist?

In November 1582, William Shakespeare married Anne Hathaway, a woman from Shottery, a small village just outside of Shakespeare’s native Stratford-upon-Avon. Shakespeare was a strapping eighteen year old; Anne Hathaway was almost a full decade older. At the time, she was more than three months pregnant with their first child. It’s got ‘shotgun wedding’ written all over it, right?

Although the marriage produced three children, Shakespeare spent most of it working in London. However he did retire in 1613 and went back to Stratford-upon-Avon to live with his wife, who outlived him by seven years in the end, for all of their age gap! Most historical fiction writers have the pair living entirely separate lives, hating one another, rueing the day he ever got her pregnant and tied them together – but there’s no real evidence for their feelings, either way.

So it is surprising to see an entry in the Episcopal register at Worcester which states in Latin: “Anno Domini 1582…Novembris…27 die eiusdem mensis. Item eodem die supradicto emanavit Licentia inter Wm Shaxpere et Annam Whateley de Temple Grafton.” This clearly states that a marriage licence has been issued to one William Shakespeare and one Anne Whateley to marry in the village of Temple Grafton. This licence predates the “William Shagspere and Anne Hathwey” one by only one day.

So! It seems the young Shakespeare had two women on the go – two Annes, no less! He wanted to marry one (Whateley) but had rather carelessly gotten the other one pregnant (Hathaway) and was pressured by the latter’s family into a face-saving marriage.

Of course, it could be another William Shakespeare; it could be a clerical error; it could be that Whateley was another surname Anne Hathaway tended to use – not that any of these are particularly likely. Myself, I rather like the romantic idea that Anne Whateley was the wife of William Shakespeare’s heart – perhaps his ‘Dark Lady’ of the sonnets? – and when he wrote so beautifully of love and yearning, he was thinking of her and the life he would have had, had not Mistress Hathaway proved so damnably fertile.

3 thoughts on “Shakespeare and his two wives”