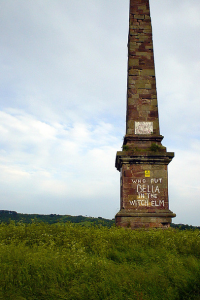 One sunny spring day in April, 1943, four youths went poaching in Hagley Wood, land belonging to the estate of Lord Cobham, part of the shadowy valley of the Clent Hills in the Midlands. They came upon an ancient, hollow elm tree – one that had a reputation time-out-of-mind, and was mistakenly referred to as a “wych-elm” by the locals. The eldest boy decided it was the ideal place to search out birds’ nests – and the eggs therein – and began to clamber up the tree.

Once he’d reached a good height, the boy happened to glance down and into the hollow trunk below him. Staring back at him were the empty eye-sockets of a skull. At first, the boy thought it was an animal and reached down to pluck the skull from its resting place. Holding it in his hands however he saw the tell-tale remnants of a woman’s long, brown hair…

Horrified, the boy placed the skull back into its dark, damp home and scrambled down to ground level. Being illegally in the woods they knew they couldn’t tell anyone about their discovery without calling justice down upon themselves as poachers. They made a pact never to tell anyone about the woman in the witch elm.

But that night, the youngest boy had a pang of conscience. He couldn’t get the thought of the poor woman in her lonely grave out of his head. He told his father the whole story. His father, although a little sceptical, duly informed the Worcester Police, who paid a visit to the old tree come first light.

Along with the skull, they found a pretty-much complete skeleton, along with the rotting scraps of her shoes and clothing. The skeleton was missing one of her hands, but after a thorough search of the environs surrounding the tree the severed hand was found buried nearby.

The lady in the witch elm had been in her mid-thirties – a married mother (she wore a cheap gold wedding ring and her pelvis showed signs of childbirth). She was short – only about five foot tall – and had long mousy brown hair and crooked teeth. The coroners ascertained she had been dead and rotting for about a year and a half – so since the autumn of 1941. There were no signs of disease or natural death to the body, but inside the cavity that had once been her mouth, there was taffeta, suggesting it had been stuffed there and she had died through asphyxiation.  She would have had to have been placed inside the hollow trunk not long after death, as rigor mortis would have made fitting her in impossible once her body had cooled. 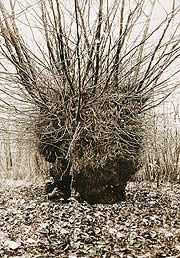 With all this information, the police felt confident that someone would come forward to confirm the woman’s identity before too long; but the long years of the Second World War had resulted in many lost and missing women and still the skeleton remained a “Jane Doe”. There was only one further clue. A local businessman had filed a report in July, 1941; he had been walking home through Hagley Green, skirting the border of the wood when he had heard a woman’s desperate screams. A couple of minutes later, he ran into a local teacher who had also heard the screams and was perturbed by them. Together the two men called the police, who arrived promptly and searched the wood, finding nothing. This incident was some twenty months before the woman’s body was found and estimated to have been dead some eighteen – surely it wasn’t a coincidence? Surely these men had heard the screams of this woman as she was suffocated with taffeta and stuffed, blood still warm, into the cavity of an ancient tree?

But for all this, the woman remained nameless, the murderer at large. Around Christmas of 1943, a spate of mysterious graffiti began to appear in various places all around the West Midlands, including the city of Birmingham itself. The first asked, starkly: “Who put LueBella down the wych-elm?” Various versions of this question appeared all over the area (including: “Hagley Wood Bella”) until in 1944 they settled down to the phrasing that remains to this day: “Who put Bella in the witch elm?”

At first the graffiti was thought to be by a prankster with a sick sense of humour, but after a while the police began appealing for the culprit to come forwards – the longevity of the ‘hoax’ seemed to suggest that it wasn’t that at all – and that the person responsible might know something. The police and the press adopted the name “Bella” for the elm tree skeleton. As before, nobody ever came forward.

What did come forward was a new theory. Had someone thought that Bella was dangerous, a witch? Ancient folklore told of a tradition where a witch’s corpse was imprisoned inside a tree to prevent her spirit causing havoc or seeking revenge. Implausible? Ten years later a woman came forward to claim that she believed “Bella” to have been a Dutch woman, operating in a German spy-ring in the West Midlands – reporting on the status and location of the many munitions factories in the area – and that she had been discovered and murdered by the British, or turned-on by her own side when she learned too much. Nothing ever came of this lead though; to this day, we don’t know who Bella was, or why she was killed, or by whom. The (now) West Mercia police continue to leave her case-file open.

It seems that ‘Bella’ is to have no rest. Her spirit is said to haunt the nearby Gypsy’s Tent pub (now called the Badger’s Sett) which is opposite Hagley Wood. The pub suffers from cold spots, doors opening of their own accord and objects being mysteriously moved around the room. The owners and patrons have always referred to this ghost as ‘Bella’. The community haven’t forgotten her. On 18 August, 1999, a 200 year-old stone obelisk on the Hagley Hall estate was found one morning covered in graffiti in tall white letters asking again: “Who put Bella in the Witch Elm?” 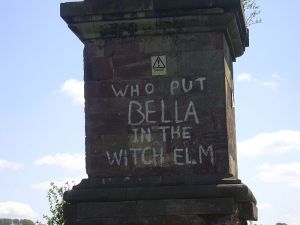 5 thoughts on “Who put Bella in the Witch Elm?”