So I’ve been promising Miss Lawless a guest blog for some time now (at least 6 months?!) but I just never quite got round to it. What’s my excuse? Honestly, I’m not sure that I have one. Life, work and trying to master being a grown up in a foreign country all played their part in keeping me from putting finger to keyboard. That, plus the fact suitable inspiration for a topic insisted on eluding me. I mean, rude. But here it finally is, in all its, er, glory? 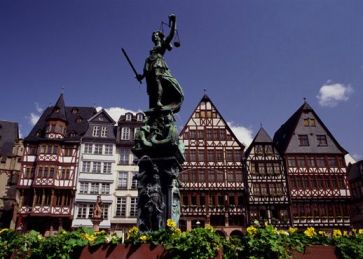 Today, I have lived in Germany for exactly one year. Picture the scene.

I land in Frankfurt, Germany – the city I now call home – and walk (I like to think I strode with purpose but probably I just kind of wandered in a daze) through the Arrivals Lounge of Frankfurt Airport armed with one large (and probably overweight) suitcase, a smaller case and one oversized, overflowing handbag (I *definitely* was working the BA luggage limits to my full advantage). This was it. I was ready for the adventure that comes with moving your entire life to a foreign country. An adventure that has been simultaneously more than everything I expected and yet nothing I thought it would be.

That was one year ago. That’s THREE HUNDRED AND SIXTY-FIVE (and a smidge) DAYS! Holy cow.

I’m sure it’s only coincidence, but recently I think I’ve lost the Tourist/Foreigner look. How do I know this? More and more Germans start merrily chatting away to me about day to day things. In German. Usually in those cases I understand them at first, but then they start using complex verb tenses etc, so, because I am British and couldn’t possibly interrupt them, I resort to smiling and nodding. One of these days I’m going to smile and nod to the question of “So tell me, are you interested in men who like to keep women’s ears in buckets?”

Let me explain – I moved with very little prior knowledge of German. In fact, what I knew you could probably write on one side of A6 paper in large calligraphic handwriting.

Now, 12 months on, I know a bit more. Sometimes I can even string a sentence together. But, I still experience those awkward, socially-debilitating moments when an adult (or a child) says something very fast to me in German and I just look blankly at them. And then there are the times when I’m trying to helpfully inform someone that the ATM has no money but casually tell them “I have no yellow” instead.

Being as most Germans know enough English to have a conversation, my speed of learning hasn’t exactly been lightning. And while Germans speaking good English has its uses (I wouldn’t have a job for starters), what it does mean is that even after a year, social situations with German speakers consist of a lot of me standing around, following the people I know who are patient enough to translate/explain/speak English, mixed with a lot of trying to keep up with a conversation happening very fast in a language I barely understand. I don’t have a good attention span at the best of times either.

Maybe it’s because I work in an industry that relies heavily on language and communication, I am so acutely aware of my shortcomings when it comes to the German language. But alongside all the painfully awkward moments, there is a funny side. For example my sheer joy when I actually understood a German joke (only because it was a play on words about “ein stein” and “Einstein”) and the moment when it dawned on me what I had actually said instead of “The ATM has no money”.

As every German tells me however, German is a hard language to learn, with its strange sentence structure and rules, so I shouldn’t feel too bad about my poor skills. (Don’t even get me started on trying to figure out the right article for a word. Why on earth would something change gender when it’s plural?!)

That all said, I still dream of the day I wake up able to understand German and answer back fluently. If it could come quickly – preferably before I make an utter fool of myself politely smiling and nodding in a situation that clearly doesn’t require that response – that would be fantastic.